If you are a bread lover, nothing beats the tangy taste and chewy texture of a hand crafted sourdough or the airy texture and chewy crust of a French baguette.

Artisan bread is best described by thinking about the person who makes the bread. An artisan baker is a craftsperson who is trained to the highest ability to mix, ferment, shape and bake a hand -crafted loaf of bread. They understand the science behind the chemical reactions of the ingredients and know how to provide the best environment for the bread to develop.

Compare an artisan baker to other familiar craftspeople. A baker’s work parallels that of jewellers, glass blowers or furniture makers. They all have a palette of preferred, trustworthy materials. They know how to combine their materials to build something strong and at the same time delicate or elegant. Combining the raw materials in different ways will create various shapes, textures or colors. The finished product is something to be proud of when so much thought and creativity went into it.

How to tell a true hand-crafted bread from one that is just called artisan? First look at the ingredients. There shouldn’t be anything in bread besides flour, water, salt and yeast. If the bread is made with a sourdough, such as SOL Breads there may not even be yeast in the ingredients. Flavoured breads may list other recognisable ingredients like nuts, garlic, herbs or cheese. Viennoiserie bread, for example a brioche, will include milk, butter and/ or eggs. All of the ingredients should sound like familiar foods. Remember you are buying one of the oldest, most basic foods there is. It wasn’t necessary to add chemicals to bread for centuries, and it still isn’t.

Next think about the place that the bread was made. In a small artisan bakery the baker will often show you around. If the bread is made in a large factory you might not get past the front gate. An artisan bakery is small enough that it is possible to train each worker to understand the whole process of making the bread and to make small enough batches for one or two people to manage. A large factory has more of an assembly line production where each worker is trained to operate a machine that completes one portion of the process. Each hand crafted loaf will have its own unique, irregular shape.

Bread is like wine or cheese. Control of the fermentation and the action of natural bacteria can produce anything from a light delicate flavor to a deep, strong, rustic flavor. Just as you might pair wine with food you can do the same with the large variety of artisan breads available. A sweet baguette is perfect with sweet butter and jam. A rustic, hearty country sourdough makes a great sandwich with meat or is good for sopping up stew. Taste all the different varieties available and take the time to appreciate the differences in where they came from, what types of ingredients and fermentation were used, how much time was put into making them and the different characteristics of taste and texture and color, just as you would with wine or cheese. Your effort will not only be educational but deliciously rewarding.

The story begins with a Starter 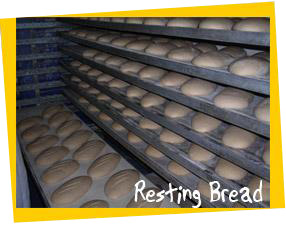 A pre-ferment (pâté fermentée), also called a sponge, a starter, or the mother dough is a fermentation starter used in bread baking. It usually consists of a simple mixture of flour, water, and a leavening agent (typically yeast), and is added to bread dough before the kneading and baking process as a substitute for yeast. Though they have declined in popularity as direct additions of yeast in bread recipes have streamlined the process on a commercial level, pre-ferments of various forms are widely used in artisan bread recipes.

Using a pre-ferment and a longer fermentation in the bread making process gives greater complexity of flavoir, through yeast and bacterial action, enhancing the flavor and keeping time of the finished product. The starter ingredients are mixed in a container at least three times bigger than the ingredients, to allow room for the starter to grow. The starter is left sitting at room temperature, for up to 72 hours before being added to the dough. Starters typically last three to five days, but this time can be extended through refrigeration and providing more water and flour until it is ready to be used.

There are several kinds of pre-ferment commonly used in bread baking:

Sourdough starter is likely the oldest, being entirely reliant on wild yeasts present in the grain and local environment. Sourdough starters are maintained over long periods of time. The Boudin Bakery in San Francisco for example, has used the same starter dough for 150 years. These starters generally have fairly complex microbiological makeups, most notably including wild yeasts, lactobacillus, and acetobacteria. A roughly synonymous term in French baking is levain.

Old dough (pâté fermentée) sponges can be made with any sort of yeast, and essentially consist of a piece of dough reserved from a previous batch of bread, with more flour and water added in to feed the remaining yeast.

Biga & Poolish are terms used in Italian and French baking, respectively, for starters made with domestic baker’s yeast. Poolish is usually a fairly wet starter, while biga can be wet or dry. Poolish was first used by Polish bakers around 1840, hence its name, and as a method was brought to France in the beginning of 1920s.

We use a traditional natural fermentation process to raise the dough instead of commercial yeast. This process involves using a ‘leaven’, originally cultivated more than a decade ago in the rainforest surrounding Byron Bay, and still alive today. A leaven starter is a pre-fermented batch of flour and water that eventually becomes a natural culture of wild/natural yeast and lactobacilli (bacteria).

To “unlock” the nutrients of the grain in bread, phytic acid needs to be broken down. Naturally leavened breads rise over time – the acidity (PH level) and lengthy fermentation process provide the perfect environment for this to occur. Breads baked with commercial yeast rise much too rapidly, furthermore the acidity is not adequate for effective neutralization of the phytic acid.

The friendly bacteria (lactobacillus) which is generated during the fermentation aids in the digestion of all complex carbohydrate foods. It also assists in restoring the functioning of the digestive tract resulting in healthy assimilation and elimination. These beneficial bacteria help to control candida albicans and generally support the whole immune system.

The yeast allergy suffered by some people is related to commercial yeast, a fungus that is propagated in large foundries and has no affiliation with the grain used to make the bread. It is designed to increase the speed of the dough rising therefore cutting corners and reducing production costs.