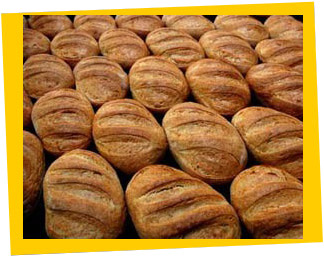 Information sourced from the article ‘The Power of Sourdough Bread’ by author Shasha Navazesh.

Home-baked bread is truly a gift from the heart and sourdough bread is an especially satisfying and healthy choice. Free of commercial yeast, sourdough breads have an aroma and a distinctive flavour all their own and are naturally leavened by a fermented starter.

Bread was first leavened by the Egyptians around 2300 BC.  They discovered that a mixture of flour and water left uncovered for several days bubbled and expanded. If mixed into unleavened dough and allowed to stand for a few hours before baking, it yields a light sweet bread. This kind of natural leavening remained the basis of Western bread baking until the 20th century when bread made from commercially prepared yeast was introduced.

Naturally leavened breads rise over time (6 to 8 hours) by the action of wild yeast spores drawn into the sourdough starter from the air. Mixing the starter with more flour and water and a little salt forms bread dough. As the unique and complex family of friendly bacteria thrives on the nutrient-rich whole grain flour and mineral-rich salt, they produce carbon dioxide gas. Fermentation continues, and the leavening or expansion of the bread dough creates a fine-grained, moist texture.

In addition to being naturally leavened, home-baked sourdough breads offer other nutritional benefits because it contains only the highest quality ingredients such as organic whole-grain flours, purified water, and unrefined mineral-rich Celtic Sea Salt. With great-tasting flours, the addition of oil and sweetener is unnecessary because the grain itself tastes rich from the oil in the germ, and sweet from the natural complex sugars in the grain, especially when it is freshly ground.

The fermented quality of naturally leavened bread has several health benefits over yeasted breads. Yeasted breads rise very quickly by a refined yeast strain that has been isolated in a laboratory under controlled conditions, using a process we could never duplicate in our kitchens.

In the process of making sourdough bread, during the rising time (called proofing), bran in the flour is broken down, releasing nutrients into the dough. In particular, the phytic acid (phytin) in grain needs to be 90% neutralised in order for the minerals concentrated in the bran, to be absorbed by the human body. According to the experiments done in Belgium, phytin can be neutralized by natural bacterial action and to a lesser extent, by baking. In naturally leavened bread, the combination eliminates all phytin, while in yeasted bread about 90% remains.

Furthermore, with sourdough bread, complex carbohydrates are broken down into more digestible simple sugars and protein is broken down into amino acids. Enzymes develop during proofing which are not lost in baking since the center of the loaf remains at a lower temperature than the crust.

It’s the fermentation, partly from lactobacillus, that makes eating good quality bread an aid to digestion of all complex carbohydrate foods including other grains, beans, and vegetables. It helps restore the functioning of the digestive tract, resulting in proper assimilation and elimination. These beneficial bacteria help control candida albicans, whereas baker’s yeast is a pro-candida organism. This is a brown bread that truly is “the staff of life” as it enhances the whole immune system.

People with allergies to commercially yeasted breads may not have the same sensitivities to naturally leavened whole grain sourdough bread. The cause may be either the wheat and/or the yeast. Often, people who are sensitive to yeasted white bread do not react to whole wheat bread. Others, who are sensitive to whole wheat bread, do not react when the leavening used is natural sourdough starter, and especially when the flour is freshly ground. Another approach is spelt flour instead of wheat flour. Spelt is the original strain of bread wheat from Europe, and it has not been hybridised. Rye or kamut flour is another choice that is nice used in small amounts.

Bread and grain-based diets give the illusion that they do not readily digest. Natural leaven bread, because of its inherent beneficial ferments, slowly recreates the population of friendly lactobacillus digestive bacteria in the digestive tract. The end result is a recovery of digestion and proper elimination by the effective action of friendly bacteria. Natural leaven bread provides more stable nutrition than that obtained mechanically by non-fermented (and thus non- pre-digested) bran and other raw or cooked roughage diets, since these only succeed in physically abrading and irritating the colon.

In order to maximise the benefits of sourdough, non-commercially processed high quality ingredients are essential.

Only as good as the flour

There is evidence that as long as 2,000 years ago in Egypt (perhaps earlier in Persia), milling systems used stone to grind the grain, leaving some undesirable stone chips in the flour. The flour would then be sieved to remove the stone, removing most of the bran and the germ as well, leaving the white flour for the elite and the dark flour for the poor. During the 19th century, iron roller mills made flour milling more economical and efficient by replacing stone milling. Commercial grain processing today strips out bran, germ, B vitamins, vitamin E, chromium, magnesium, manganese and zinc from flour. In total, about 20 minerals and vitamins are lost to a significant degree. These essential nutrients are the first to be lost in commercial flour processing because they’re volatile, especially when stored for a long time.

It was common to store white flour for months to allow oxygen to condition it. Storage costs, spoilage and losses due to insects caused commercial processors to use chemical additives. Chemical oxidizing agents or bleaches were used for two reasons: 1) they produced the same conditioning effects of oxygen in a shorter time; 2) they bleached the flour to a whiter colour.

Many flours are “enriched,” which is doublespeak for the substitution of natural vitamins and minerals with synthetically produced vitamins. Enriched flour doesn’t provide substitutes for everything taken out of the original, however. The trace mineral chromium, for example, is commonly forgotten.

Whole-grain stone ground flour doesn’t need to be enriched. In addition, there are several other advantages to stone ground whole grains. The endosperm, bran and germ are in their natural, original proportions, allowing for higher and better nutrient absorption. Stone grinding is slower, so the germ is not exposed to high temperatures. Heat causes the fat from the germ portion to oxidize and become rancid, destroying many of the vitamins (particularly fat soluble ones such as vitamin E). Stone ground flour is usually coarser, reducing the loss of nutrients due to oxygen exposure.

Add sprouted grains for an increase in protein, vitamins, minerals and enzymes. The nutrients in real sourdough bread are more bio-available and easier to digest and the bread retains natural dietary fibers. If you eat bread (and who doesn’t), eat naturally cultured sourdough.

A baker who uses bakers yeast could produce a loaf of bread from start to finish in just 90 minutes whereas the sourdough baker may require up to 36 hours to produce the same size loaf. And in the process, the nutritional properties of the sourdough bread change dramatically, maintaining optimum health.

Why is sourdough supreme? 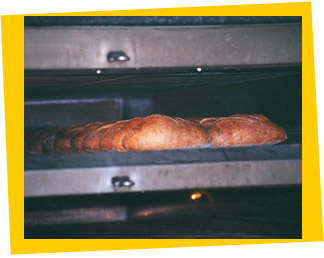 Low GI
The glycaemic index of sourdough bread is 54 compared to 71 for non-sourdough white bread, making sourdough bread a low GI food. A low-GI ranking indicates that sourdough is digested and absorbed more slowly by the body which produces a more gradual rise in blood sugar and insulin levels. This has been proven to provide many health benefits for medical conditions such as diabetes while also assisting in weight control by improving appetite control and delaying hunger.

Minerals and Trace Elements
Sourdough bread, as a result of the sourdough fermentation process, provides the body with the highest availability and absorption of essential minerals and trace elements. Grains and flour are good sources of essential minerals and trace elements like calcium, phosphorous, magnesium, iron and zinc. However these grains also contain phytic acid which stops the body from being able to absorb these minerals. Many studies have shown that the sourdough fermentation process was almost 40% more efficient at reducing the phytic acid content in bread than any bread making process (which used baker’s yeast). Plus, the lactobacillus bacteria present in sourdough has also been shown to increase the body’s ability to absorb minerals. All-in-all, sourdough appears to provide more minerals to the body than any other bread.

Easily digested
The longer leavening process is one of natural fermentation, which includes organic yeasts and enzyme enhancing bacteria. These combine in a process that results in a bread that is easier to digest than yeast containing breads.

Extended shelf life
Sourdough has extended shelf life compared with other breads due to the acid present in the starter culture during sourdough fermentation. The use of sourdough in bread production has been proven to be beneficial in improving sensory properties such as taste and smell, delaying firmness/staleness and preventing mould and bacterial spoilage. These attributes contribute to produce a superior loaf in both taste and quality to most other breads.

“What is the advantage of vinegar, lemon juice, and sourdough bread?” in What Makes My Blood Glucose Go Up…and Down?